The Web of the Peoples is a dialogue between communities, territories, peoples and political organizations, both rural and urban. Extractive workers, riverside dwellers, native peoples, quilombolas, people from the peripheries, landless, homeless and small farmers come together, as basic units and links, in this composition aiming at formulating the paths of collective emancipation. In other words, building a Black, Indigenous and Popular Alliance in solidarity.

With the project Land and Territory through autonomy, we seek to build an alliance for struggle independent from electoral politics and State institutions. Shaping the autonomy of peoples and outlining a food sovereignty program are the steps we understand as necessary for true liberation, as it is historically evident that only our own hands will give us the conditions to defend our survival.

With that in mind, we place Creole Seeds as the foundation. We return to the beginning, anchored in ancient wisdom, trying to think of an agricultural practice that differs from the currently hegemonic one. Contrary to everything that agribusiness represents – a project of death against biomes, landowners’ violence against traditional communities – in the agroecological struggle we have established the generation of wealth and the conservation of the Earth as the totality of Life.

Those experiences and pondering over the essential elements of the foundations of the Web began in 2012, with the 1st Journey of Agroecology, held at the Terra Vista Settlement. Since then, we have periodically organized actions to move forward. The Journeys themselves – already in their 6th edition – are moments for peoples gatherings. In the last one, in 2019, we received about four thousand people in the sacred lands of the Payayá people, in Utinga-BA.

Before the Journeys, we organize the Pre-Journeys – practical actions (joint efforts for autonomy, also known as “mutirões”) and roundtables that take place in the territories as preparations for the main event. Examples of Pre-Journey activities are construction of Agroforestry Systems (in Brazilian Portuguese, Sistemas Agroflorestais – SAF), construction of cisterns for capturing rainwater, organization of the seed networks.

There are three founding principles of the Web, reaffirmed year after year as a common horizon among those who compose this alliance:

I. Land and food as a philosophical and life principle, which is built through unrestricted solidarity to movements for the defense of territoriality, using the pedagogy of example.

II. Work and study for freedom that enables the construction of a new way of life, deconstructing the legacy of the capitalist, racist and patriarchal models.

III. Reaffirm the ancestral gaze in the construction of a new time, contextualized to our form.

Some aspects of organicity should be noted here. The first is that we understand that our nature of network is due to the fact that social movements and political organizations, peoples and territory, have a vast history of conflicts, betrayals and disagreements in the process of building unity around a single flag. So we understand that nobody needs to lower the flag of their own struggle to form an Alliance. Our goal, therefore, is not to be a social movement that encompasses others. We want to walk together, not to produce a monolithic unity.

The second aspect of organicity is that here we want to confront a very usual logic in which intellectuals take the leadership of a workers’ organization and soon become detached from their reality. The Web of the Peoples is organized through Basic Units and Web Links. The Basic Units are communities, peoples, territories and political organizations that are territorialized. The guideline for action, the general strategy and the goal of the struggle are therefore derived from the peoples. Web Links are groups of agroecology, intellectuals, university research groups, students, associations, cooperatives and other groups that are not territorialized in their action. Those Links must offer support and build territorial power from the Basic Units. Here the principle is clear: those who have already conquered the land and are building the territory have primacy over those who have been reflecting on this political field.

With the growth of the Web of the Peoples, the collection of Basic Units and Web Links in a given region need to build a Regional of the Web of the Peoples, as a way of making their decisions in an appropriate forum, thinking about their biome, their socio-environmental conflicts and their own characteristics. Regionals need to reach their own consensus, build their pre-journeys and send reports to other comrades. Finally, there are Divisions dedicated to specific actions in an area. For example, there is the Communication Division that keeps our website, social networks, communications and contacts for the alliance outside our territories. A Division is composed of people from Basic Units and Web Links, in addition to having independent activists who are organizing themselves in response to specific tasks.

We invite everyone to this urgent mission. We are aware that difficulties imposed on our population have worsened because of the tragedies of the times live in. Hunger, absence of decent housing, the genocide of the black youth, the attack on indigenous peoples and other hostilities caused by racism, capitalism and imperialism, they are all enemies of our people. We cannot allow that, we need to act quickly to stop death and accelerate the journey through free life, without masters. 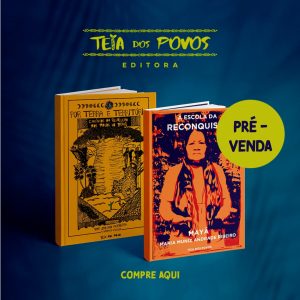