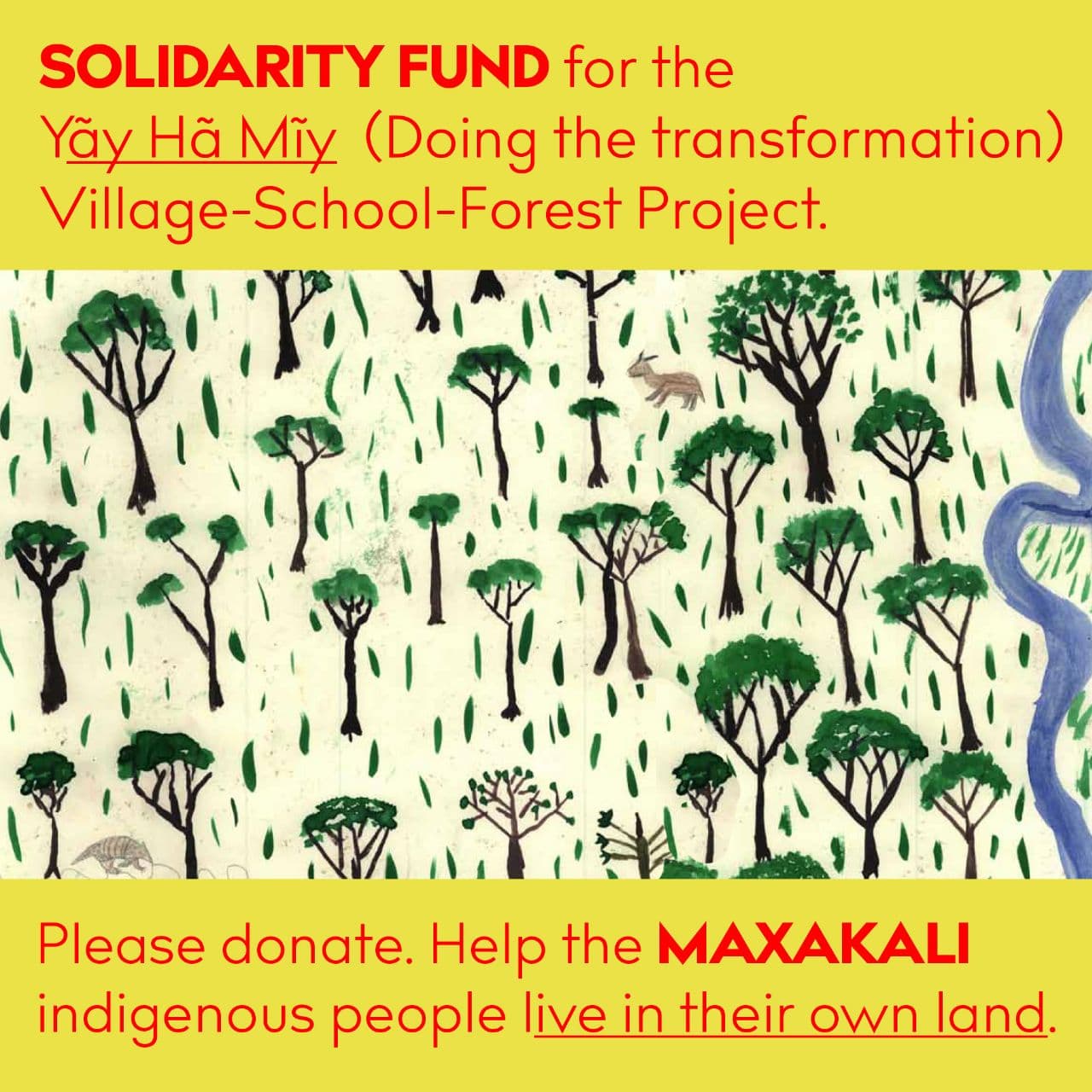 This campaign is aimed at acquiring land to provide living conditions for the Tikmũ’ũn (Maxakali) community, led by Isael Maxakali and Sueli Maxakali, masters of the Traditional Knowledges program at UFMG. The community lives today in a temporary land in the municipality of Ladainha (MG). With that land, we want to contribute to the construction of a Village-School-Forest for developing traditional knowledge, environmental recovery and food sovereignty – the dream of those leaders.

The situation experienced by the Tikmũ’ũn is also the history of many indigenous peoples from the most diverse regions of Brazil, who have suffered and suffer successive threats to their territories, persecutions and massacres. All that made the Tikmũ’ũn gather together, over five centuries, in small portions of their territory, today completely deforested by the farmers who took over their lands. Better known as Maxakali by the national society, those peoples currently live in the northeast of the State of Minas Gerais, in five locations, according to FUNAI (in Portuguese, Fundação Nacional do Índio; in English, National Indian Foundation) data:

(Those lands are continuous, totaling 5,305 hectares.)

– Aldeia Verde Reserve (Municipality of Ladainha) with 289 people and 522.72 hectares;

The demarcation of their territory has never followed the traditional occupation limits recognized by the Tikmik’ũn themselves. Tikmũ’ũn lands total about 6 thousand hectares for a population of 2,431. This is one of the smallest amounts of land demarcated for an indigenous people in the country. According to the Map of environmental injustice and health conflicts in Brazil[1], the Tikmũ’ũn have their physical and socio-cultural survival threatened due to territorial limitations and disputes with farmers, in addition to health issues related to malnutrition, diseases, lack of medical care and food insecurity. The health, food and environmental situation of the Tikmũ’ũn is disturbing, and is aggravated by the lack of drinking water. A long and difficult process of requests from the communities, complaints and interventions with the Federal Public Ministry attest to the effort of the indigenous people to find a solution for this unsustainable situation.

Despite this suffering, the Tikmũ’ũn have persisted in their ways of life, preserving their spirituality, their language and their poetic, musical and mythical heritage. This demonstrates the ability to resist speaking their own language, standing up against centuries of contact. They are guardians of a linguistic and cultural treasure of indigenous peoples and languages that have disappeared from the vast region of the Atlantic Forest. In addition, they are true connoisseurs of that biodiversity, preserving in the memory of their chants detailed descriptions of that knowledge, despite the ongoing disappearance of the forest. Due to their exceptionality, vigor and cultural resistance, the Tikmũ’ũn have played a real challenge for the world of the capital in the 21st century.

The Project, consisting simultaneously of a Village-School-Forest Yãy Hã Mĩy (“doing the transformation”, Yãmĩy), aims at obtaining a land where the Tikmũ’ũn can live with dignity, strengthening the community and the ancestral knowledges. The Village-School-Forest will be a place for the exchange of knowledge, in which it is necessary to build an educational process and a process of exchanges between Tikmũ’ũn elders and young people and non-indigenous people. They understand that their future also depends on “pacifying” non-indigenous people, deemed as individuals with high potential for depredation, helping them in their reconciliation with the planet. The main objective of the Village-School-Forest is to protect and disseminate the knowledge of the Yãmĩyxop (multiple beings and othernesses with whom they elaborate all the knowledge they have about the world and other beings). Thus, the Tikmũ’ũn intend offer courses on ethno-environmental knowledge, mapping of fauna and flora, environmental management, agroforestry, seedbed creation. In the future, they will be able to share with indigenous and non-indigenous peoples the knowledge consolidated in the School.

In short, we believe that the Village-School-Forest Project can contribute to the preservation of the Atlantic Forest, because as “children of the land”, the Tikmũ’ũn know how to heal the land, bringing back the forest, plants and animals. When conditions for access to land are met, the Tikmũ’ũn will conquer conditions for their food sovereignty through subsistence farms. When the seedbeds are set up, they will be able to trade and even sell seedlings and small trees in danger of extinction, which also allows for the production of handicrafts, generating income for the community. For the Tikmũ’ũn, land, rivers and forests are the school itself.

For whom the end was considered inevitable or for whom the world has almost ended several times, indigenous peoples have much to teach us about the future. The future as a place of bonds, of ties between people, the land and all its living beings. A place for transformation. This is the dream of the Tikmũ’ũn: the construction of another possible world to be shared through the Yãy Hã Mĩy Village-School-Forest Project (“doing the transformation”).

3 People reacted on this